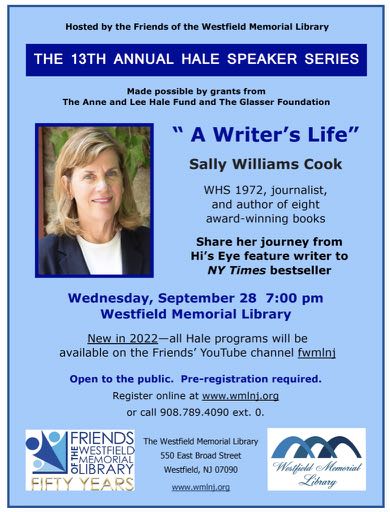 Author Sally Williams Cook will be the second speaker in the 13th annual Hale Speaker Series. The free talk is open to the public with pre-registration required either online at www.wmlnj.org or by phone at 908-789-4090 Ext. 0.  Hale Series talks will be streamed live and available later on YouTube on the Friends’ channel fwmlnj.

In her “A Writer’s Life” talk scheduled for Wednesday, September 28, at 7 p.m. at Westfield Memorial Library, Sally will share her journey from a Westfield High School’s Hi’s Eye feature writer to an award-winning author whose works are published by Simon and Schuster.  Sally’s books (often about sports and athletes) are popular with adults, young adults and children

The series, hosted by the Friends of Westfield Memorial Library, receives funding from The Glasser Foundation and the Anne and Lee Hale Foundation.